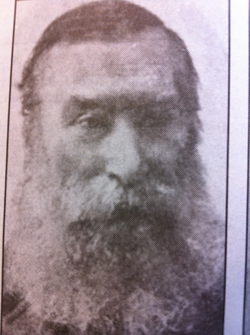 Founding editor Robert Ross Haverfield
The Bendigo Advertiser has delivered trusted news to the people of central Victoria since 1853.

Arthur Moore Lloyd and Robert Ross Haverfield founded the newspaper on the goldfields with Haverfield the founding editor.

The first issue of the Bendigo Advertiser and Sandhurst Commerical Courier appeared as a single sheet, 17 inches by 11 inches, on December 9, 1853.

The production cost of the 500-copy print run for the first edition was 18 pounds and the newspaper cover price was equal to five cents in today's value.

The trio rapidly developed the newspaper into what one writer described as ''the most powerful organ of public opinion in the provinces''.

His son Cyril would later join the newspaper as a cadet in 1922 and go on to play a major role in the development of the newspaper, retiring as editor in 1972.
Another significant moment in the Bendigo Advertiser's history occurred on July 29, 1962, when fire destroyed the 'ultra modern structure' that was its home leaving a damage bill of 250,000 pounds.

One of the most unfortunate results of the fire was the complete loss of the newspaper's files dating back to the first edition in 1853 and an historically significant photographic library.
Production of the newspaper for its next issue proceeded despite the fire.

For the next week Bendigo radio station 3BO offered space for a news room for Bendigo Advertiser staff to work while the production was carried out at the Riverine Herald offices in Echuca.

The Bendigo Advertiser changed from a broadsheet publication to its present tabloid form in June 1998 and published its first full-colour edition on June 15, 1998.

Today, the Bendigo Advertiser continues to deliver trusted news to central Victoria, but the format is changing.

As well as the printed version which now sells around 80,000 copies each week, the Bendigo Advertiser has an extensive website and on June 12 steps into a new horizon with an iPhone app.

The Bendigo Advertiser is committed to delivering real news everyday.